Just a few weeks ago these four bundles of fur were spotted with its mother bounding around the reserve.

Cheetahs, being Africa's most endangered cat, meant the discovery came as a huge celebration on the reserve. These four little cubs are just a few weeks old and will stay with their mother for at least a year while she teaches them skills such as hunting. They have been moving around the reserve to new hiding spots every few days to protect the young cubs from predators such as lions. The Amakhala rangers have also been keeping their distance during the first few weeks to give the mother and her cubs their space.

The cheetah cubs have long smokey mantles (thick woolly hair) running down their backs at the moment, strategically making them look like honey badgers and helping them blend into the grass, as well as put off other predators such as the lions roaming around the reserve too. 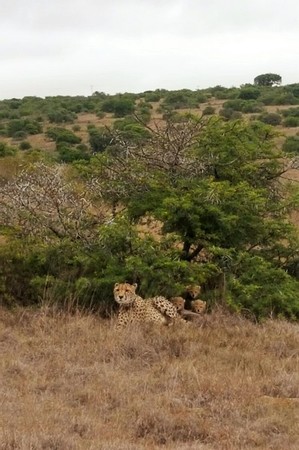 These playful cubs have been a joy and excitement on many of the recent game drives with our guests, and we are thrilled to have the priviledge of watching them grow up in the Amakhala. We're very happy to have a few more of these speedy and graceful cats in the reserve.

Many thanks to Lion Roars ranger Vuyani for the video clip and photo.